A Short History of Bowen Therapy

The history of Bowen Therapy was born with its founder Mr. Tom Bowen, who developed the Bowen Technique in Geelong, Victoria.  After serving in World War II Mr. Bowen became interested in ways of alleviating human suffering.  He noticed that when he made certain moves on a body, it had particular effects which initiated healing of many complaints.  Mr. Bowen developed the technique without training in any health care field: he claimed that the work was simply a gift from God.  He developed the system as it is today and eventually opened his clinic full time.  The 1975 Victorian Government inquiry into alternative health care professionals cited Mr. Bowen as seeing some 13,000 patients per year (as assessed over a 27 week period). 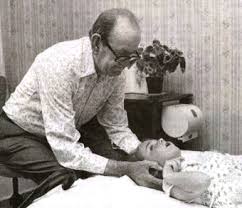 In 1974 Mr. Bowen invited Mr. Oswald Rentsch and his wife Elaine to study with him for the next two and a half years.  Mr. Bowen had no notes, charts or manuals but under the guidance of Mr. Bowen, the Rentschs observed and documented his technique.  This was subsequently verified by Mr. Bowen and his assistant, Mrs Rene Horwood, as a true representation of the original technique.

But the History of Bowen Therapy doesn’t stop there!

By agreement the Rentschs did not start to teach the technique until after Mr. Bowen died.  The first Rentsch seminar was in Perth, Western Australia.  Four years later the Rentschs were teaching full time in Australia, New Zealand, North America, the United Kingdom and Europe.  Dedicated to preserving the technique and ensuring it was taught in its original form, the Rentschs founded the Bowen Therapy Academy of Australia in 1987 naming the technique BOWTECH – The Bowen Technique.

The History of Bowen Therapy has now progressed to the point where it is recognised as a valid and powerful natural healing tool.

This site uses Akismet to reduce spam. Learn how your comment data is processed.